The Trustees of the Jonathan Speirs Scholarship Fund are delighted to announce this year there are two winners of the 2016/17 award: Eleanor Connolly of the Royal College of Art, London and Martyna Marciniak of the Bartlett School of Architecture, University College London. Chairman John Roake met with them last week to present them with their medals.

While the two winning scholars showed strengths in different areas, they both conveyed equally high levels of passion and creativity and showed a clear understanding of the importance of light in architectural design. They were also keen to explore the influence of light on human perception and emotion.

Eleanor will be using the scholarship to complete her thesis and bring some of her ideas to reality, in collaboration with the Grymsdyke Farm – a research facility, workshop and living space for creatives. Martyna plans to use the scholarship to fund the required models and prototypes for her final architectural projects as part of her studies, and subsequently to subsidise a period of internship at a firm in the lighting industry.

“This summer we mark the fifth year since Jonathan Speirs’ passing. We promised that his legacy would be continued through the JSSF and we are very appreciative of the support from family, friends, colleagues and companies that continue to support the Fund each year.

The Trustees discussed at some length the strengths of the nominations received this year. There were two exceptional and worthy candidates who stood out and, after further discussion and research, we reached the decision to award not one, but two awards this year.

We are therefore very pleased to announce the winners as Eleanor Connolly of the Royal College of Art, London, and Martyna Marciniak of the Bartlett School or Architecture, University College London. I have met both scholars and have seen two talented, very dedicated and ambitious students who in different ways have shown a passion and understanding of light and how it can enrich architecture and people’s lives.

The additional award this year was only made possible by an extremely generous donation from Lucifer Lighting. This was alongside the contribution they made in their role of ‘Benefactor’. We are also extremely grateful as ever to all our Benefactors, Sponsors, Contributors and Supporters who regularly make donations to the fund.

We now have a small and international community of five scholars at the beginning of their careers who we hope with the help of the JSSF will go on to great things – which was always our ambition. These are the beneficiaries of the Scholarship but we also want to encourage the other candidates in their endeavours and studies as the quality of submissions have been diverse, interesting and stimulating to critique.

We congratulate Eleanor and Martyna as well as their Tutors and Schools.”

As we prepare to award the 2016/17 Jonathan Speirs Scholarship, we look back at our previous scholars to see what they have been up to over the past year.

Last year’s scholar, Charlotte Eley, graduated from the University of Sheffield shortly after receiving her award, and, after a short summer internship with Speirs + Major in London, she found a full-time position at Hawkins Brown Architects in Manchester. She has already organised a CPD talk about the physics and psychology of lighting, and is keen to continue her research into the social aspects of lighting which she focused on during university.

Cashel Brown was awarded the scholarship in 2014/15. He has recently taken up a position at Lighting Design International and is looking forward to the new projects and challenges he will come across there. Cashel will be speaking at PLDC in November where he will present his research into lighting festivals and events that commenced with his university dissertation.

Our first scholar, Alex Stewart, is still busy juggling work at Bernheimer Architecture in New York with being a part-time faculty member at his alma mater, Parsons The New School for Design. He continues to work with and be inspired by light in both personal and professional projects.

We have been very fortunate in the talent and potential of our three outstanding scholars so far, and look forward to getting to know future scholarship winners and supporting them in their passion for light.

We are pleased to announce the next batch of student applications for our 2016/17 award have been received. The Trustees are looking forward to reviewing these over the next few weeks, speaking to the shortlisted candidates and selecting a well-deserved winner. Stay tuned!

A massive thank you goes out to Suzanne and Gilbert Mathews of Lucifer Lighting who have just donated US$15,000! Their generosity and continued support is hugely appreciated. Thank you!

Our second scholar, Cashel, has spoken at the third annual Jonathan Speirs Memorial Lecture as organised by the Society of Light and Lighting (SLL). Cashel was introduced by trustee David Speirs, who also gave an update on JSSF. Cashel spoke about the scholarship, his passion for light and what inspires him as a lighting designer. The lecture also featured Malcolm Innes, senior lecturer at Edinburgh’s Napier University, and was held at Heriot Watt University, Edinburgh. 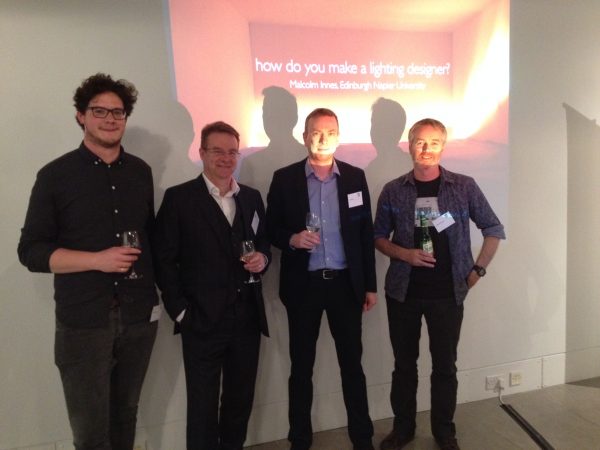 Thanks to Knight Architects

Huge thanks go to Knight Architects who have recently signed up as Sponsors of the Jonathan Speirs Scholarship Fund. All the support from our Friends is much appreciated and goes towards funding brilliant students of architecture to pursue their passion for lighting.

We are excited to reveal the 2015/16 award has been made to Charlotte Eley, a Year 6 Architecture student completing her MArch at the University of Sheffield.

Chairman John Roake, who presented the medal to Charlotte, commented: “We were impressed by the maturity and sensitivity of Charlotte’s application, which conveyed her passion for the potential for light and architecture to tackle large social issues such as inclusivity, crime prevention and community cohesion.”

As Charlotte explains: “I believe good lighting design should be accessible to all, being designed and provided for all members of society, from school children to the homeless. Each of my architecture projects at university has tackled different issues of lighting, including crime prevention and inclusion, the tyranny of commercial supermarket lighting and the role of lighting in creating spiritual environments at the end of life.”

After graduation, she is hoping to turn her theoretical university studies to real life situations whereby good design is made available to all walks of life.

An update on our Scholars

As we get closer to announcing the winner of the 2015/16 Scholarship, we take a look back at our two previous scholars and what they have been up to since they were awarded the Jonathan Speirs Scholarship.

Our first Scholar, Alex Stewart, has graduated with honours from Parsons School of Design and has begun working with the award-winning Brooklyn-based firm Bernheimer Architecture. At Bernheimer, he has assisted on the design and development of two affordable housing projects within the five boroughs of New York, and is currently overseeing the construction of a high-end residential building in the West Village district. This past fall he took a position as adjunct faculty at Parsons, teaching in the Masters of Architecture program, while in December, his studio project from the previous fall with his colleague, Kristen Garibaldi, was selected by the Architect’s Newspaper as the Student Project of the Year.

Alex comments: “Working with light is paramount to the designs I’m developing with Bernheimer, and in my own, personal projects. Though we are an architecture firm in practice, we consider light to be a free building material, one that through formal manipulation produces more intimate and democratic space, no matter the client and budget.”

Last year’s Scholar, Cashel Brown, graduated in October 2015 from Edinburgh Napier University last year after completing his dissertation on the topic of lighting festivals and their role in urban design. He has since moved to London and is now working as a lighting designer at Nulty+. Cashel is currently working on his submission for SLL’s Young Lighter of the Year and will be speaking at their annual Jonathan Speirs Memorial Lecture later in the year. He has also been included on Lighting Magazine’s 40 Under 40 list of emerging talent within the lighting design profession.

He comments: “Working with Nulty+ has been a steep learning curve, as I take what I learned during the course of the MA Lighting Design programme and apply it to real projects with real budgets. The diverse range of projects within the office has taught me a lot about the multi-faceted nature of the lighting design profession. Much of this is with thanks to the Scholarship, as it provided me with a platform to develop these skills, alongside creating conversation with those in the profession.”

Once again we would like to extend our gratitude to our accountants Haines Watts Creative who have helped us with preparing our annual return – many thanks for your continued support.

We would like to extend a huge thank you to Gilbert and Suzanne Mathews of Lucifer Lighting, who have just donated an additional $10,000 towards the Jonathan Speirs Scholarship Fund. This donation is on top of their already generous Benefactor contribution. Thank you very much!